I’ve been on a reading binge of late. But the problem is that, unlike films or photo exhibits and the like, it’s rare I ever get a chance to discuss a book with others. I might sometimes seek out online reviews or other information about the book or author on the web, but that’s about the extent of any dialogue (one-way at that) I might engage in about it. What results is that usually about midway through the current book, I’ve pretty much already forgotten about the previous work, what I liked about it, what I didn’t, and in some dire cases, what the book was really about in the first place! So anyway, I thought it might be a good idea to put some thoughts down “on paper” as it were about books as I finish them, just to have something I can refer back to later, and to exercise my mind, even a little, with respect to the book at hand. I know I don’t have it in me to write full-blown reviews, so I think more of a bullet point style is suitable. 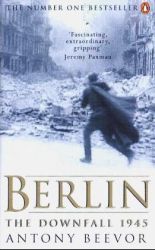 * I didn’t think I’d be able to get into the book at the outset. Not having read any histories of this period of WWII for quite some time (and certainly nothing as limited in terms of time span as this), the amount of detail that gets thrown at the reader, seemingly all at once, is rather intimidating. All the names of various military divisions, names of Generals and other important military figures, on both sides (Russian Red Army and Wehrmacht), names of weaponry and tactics, and geographical locations, was dizzying. As well, I was hampered by insufficient knowledge of events outside the purview of the book’s focus but naturally important (like the July 20 Plot to overthrow Hitler), which were not really explained in any sort of detail. I’m glad I stuck with it though. There are still plenty of details I don’t quite understand, but in the end it didn’t detract.

* While the various maps (both general and military-focused) provided helped a lot with getting a sense of where things were, I thought the included Glossary rather inadequate. I’m still not quite sure what terms like panzerfaust, or katyusha, or bridgehead mean.

* The book’s most controversial aspect, I garnered later by skimming online reviews and such, is its detailing of the widespread rape committed by Red Army soldiers as they invaded East Prussian and made their inexorable march towards Berlin. Quite frankly, I was unprepared for this, and admit with some embarrassment that I had never heard about these heinous crimes before. Quite a lot of the book, in impression if not in pages, seems to be concerned with the behavior of the advancing Red Army with respect to the raping and looting, to the point where in places it seemed like overkill.

Naturally, with crimes as hideous as these, covered over as they are in Soviet and Russian histories of the “Great Patriotic War,” can there be a point of “too much?” It’s not that I didn’t want to read about it, far from it. It’s just that at some point it started to take on an aspect of “Beevor’s axe to grind”. And, in those passages where he tried to explain it, in particular at the end of Chapter 21, it strikes me as only slightly more perceptive than bubblegum psychology. “[…] the basic point is that, in war, undisciplined soldiers without fear of retribution can rapidly revert to a primitive male sexuality.” And a few sentences later, in case we didn’t get it, he writes, “[…] there is a dark area of male sexuality which can emerge all too easily, especially in war, when there are no social and disciplinary restraints.”

* I had never read any of the books that detailed Hitler’s last days. Although I suppose much of the detail has to be taken with some grains of salt, I found it all very fascinating, and in fact would love to read a book which just dealt with these last days. I never knew for example that Hitler and Eva Braun had married at the 11th hour, nor had I ever read before about the Goebbels and the tragedy of what happened to their 6 children.

* I thought Beevor did an excellent job jumping from the various POV’s and storylines, be it the Red Army, or the German defense, or Eisenhower, the Hitler Bunker, etc. I can’t claim to not being confused on occassion, but overall I thought he did a good job maintaining interest in all the storylines and advancing each to an appropriate point before changing to another (or another POV of the same storyline).

* It was interesting to me how few times the concentration camps were mentioned, in fact when they were mentioned it was usually in only the most cursory fashion. I suppose in a book like this, where momentum was trying to be maintained, and given that there are plenty of books that focus on the Holocaust, Beevor felt it could be glossed over, if such is possible. But given how much focus he paid to the atrocities commited by the advancing Red Army, his lack of detail with respect to the camps — even on the level of how Red Army soldiers dealt with the liberation of them — seems curious.

* I found the various machinations of Stalin, and the “behind the scenes” political manoeuvrings among the Allies fascinating, but here too without context a lot of it didn’t make sense to me. Particularly confusing were the various intrigues involving Stalin, Beria, Zhukov, etc. The same could be said for much of the Nazi treachery and backstabbing.

* It seems incredibly naive to say so, but one can’t help but just feel overwhelmed by the brutality of it all. It’s probably the hardest aspect of the book, where page after page reveals a brutality so commonplace, so de rigueur of the environment, that, to borrow from Hannah Arendt, it becomes banal.