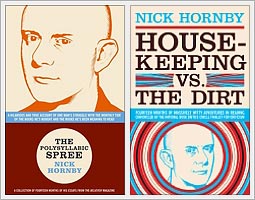 After I read Nick Hornby’s Songbook (published in the UK as 31 Songs) a couple of years back, wherein the writer takes 31 of his favorite songs and delves into why they’re meaningful for him, for weeks afterwards I had this internal voice that seemed to have been pulled directly from Hornby, which would go on and on about various songs that were important to me, where I was when I first heard the song, past girlfriends they reminded me of, that kind of thing. I even had the idea of committing these to the blog.

Something similar happened when I read these two books, The Polysyllabic Spree and Housekeeping vs. the Dirt, which gather together Hornby’s monthly “Stuff I’ve Been Reading” column from the literary magazine The Believer. Though it’s hard to put a finger on exactly what is Hornby’s style (unlike say that of Bill Bryson), it’s clearly there, and it’s peculiarly infectious for me.

Each month Hornby goes through the three or four (sometimes more, sometimes less) books he has read. These are not reviews per se, and sometimes they serve merely as springboards for other ruminations. He talks a lot of why he read the book in the first place, how he came to buy it or receive it (naturally he is sent a lot of books by publishers hoping for a review). He’s up front when he’s reading books by friends or relatives, and tries to be honest when books or genres that don’t tickle his fantasy, which requires some verbal dancing given The Believer’s policy of not being unnecessarily negative. He takes to task the “literary” novel, especially what he sees as a disturbing trend of novels about writers or literary folk, and book blurbs don’t fare much better either.

But more than that, the columns are about books, and people who not only read books, but buy them as well. Each column begins with a list of not only what Hornby has read, but also the books he has bought, and it should surprise no one who, like Hornby (and myself), likes to buy books, those two lists rarely if ever correlate. So much about what Hornby writes about in this regard, such as the compulsion to buy books that stand very little chance of actually being read, or the idea that sometimes, buying and collecting books with the purpose of appearing cultured seems to matter more than whether or not we’ve read the book, was so spot on with respect to my own book buying that I couldn’t help but curse Hornby a bit for seeing right through me (and himself). He also has a lot of good things to say about how books have acquired this feeling that they must be hard work, that unless they’re a struggle then perhaps they’re not worth it.

If reading books is to survive as a leisure activity — and there are statistics which show that this is by no means assured — then we have to promote the joys of reading rather than the (dubious) benefits.[…] [P]lease, if you’re reading a book that’s killing you, put it down and read something else, just as you would reach for the remote if you weren’t enjoying a TV program.

Along these lines, he talks about his publisher sending him a new version of the classic Candide, and after discovering that it’s only 90 pages, he decides to read it, to “chalk it off” the list of those books one is supposed to have read. And he does. However,

There comes a point in life, it seems to me, where you have to decide whether you’re a Person of Letters or merely someone who loves books, and I’m beginning to see that the book lovers have more fun. Persons of Letters have to read things like Candide or they’re a few letter short of the whole alphabet; book lovers, meanwhile, can read whatever they fancy.

(How’s this for a coincidence: the very same day that I read those words, I was in one of Tokyo’s big bookstores, on the English language floor, and in the “Penguin Classics” section. (Hornby had written glowingly about David Copperfield in the first book and I felt I should at least thumb through it.) There were three American (?) friends standing next to me, from their conversation it seemed they were studying in Japanese universities, and one of them was asking the others if they had read Candide: “Oh man, you gotta read it, it’s so awesome.” I kid you not.)

I loved both collections, and took away so many recommendations as to what I should read that really, I could fill 2007 with only Hornby-recommended books and more than likely that would suffice to keep me contented. (I have already purchased four books that were a direct result of reading these two books, and my Amazon wish list has been thrown out of whack). Both books also feature selected excerpts from some of the books Hornby talks about, which I suppose in this day of the “Amazon Online Reader” might be somewhat superfluous, but I found to be a nice bonus. (The excerpt from the yet to be published Then We Came to an End by Joshua Ferris in the second book was so frickin’ hilarious that it practically justified the book in and of itself.) And since Hornby has been so honest, let me cop to the fact that this particular book fetishist loves the look and feel of each book (they’re identical really beside the slightly different cover designs). I wish all paperbacks felt like this, nice and solid, yet supple.

If I have a criticism about the books, it would only be that after a while, I found his running gag about the “polysyllabic spree,” a kind of white-hooded editorial body who proscribe all sorts of restrictions against what Hornby can write about, to grow old after awhile. I just didn’t find it very funny to begin with, and it wore fairly thin by the end. Additionally, while the book collector in me loves having two great looking books (that I’ve now actually read, what a bonus!) to add to my bookshelf, in truth each volume is rather slim and one wonders why The Believer didn’t wait and then publish a single, more substantial collection. Perhaps when they published the first they weren’t expecting to publish another one, I don’t know, but there is a lingering feeling they were trying to milk the readers a bit. Or maybe that’s just my sour grapes at blowing through both of these books so quickly and wanting more.

You can read excerpts (and one full text) of Hornby’s Believer columns online to judge for yourself. (There’s also a nice review of The Polysyllabic Spree from Salon.) Hornby hasn’t written one since October of last year so I’m not sure if the series will be continuing or not. I for one hope it does, and if there is another collection put together, I have no doubt I’ll be adding that to my book collection, er, I mean, reading it.